Oh hi there, cowpokes! Gather round the old campfire, it's time to talk updates!

Last time we talked about the new playbooks, some new mechanics that are (more or less) sketched out at this point, and adjustments to the Basic Moves for this here game. I hope you're still excited about those, because they are just getting their final coats of paint and lemme tell you, that paint smells delicious. I think the metaphor got away from me there.

This time I want to talk about what to expect from the first four chapters of our expanded rulebook! You can find the new table of contents below, though it is still subject to change a bit. 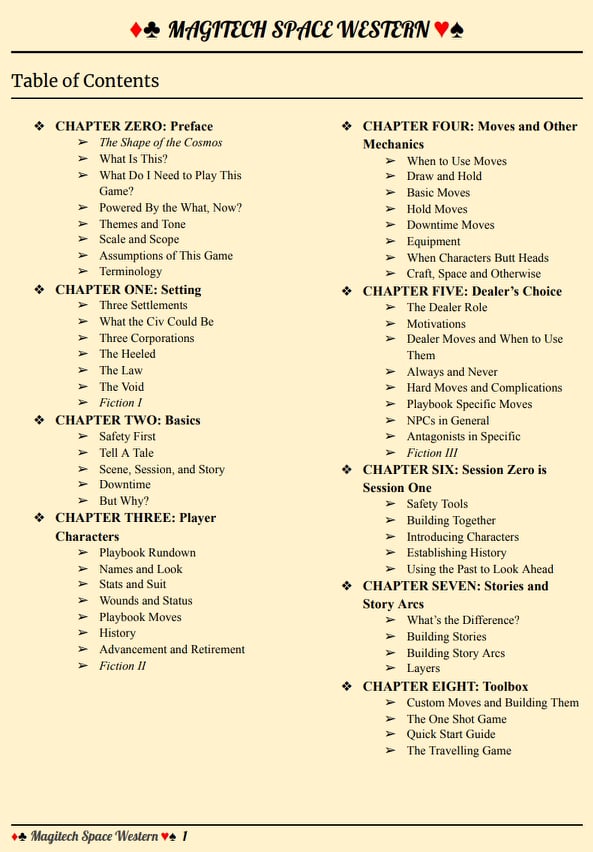 For the moment, it is as close to a finalized checklist as we're going to get before the release, so it'll do for our purposes. Let's dive in.

CHAPTER ZERO: Preface is here to explain, in no uncertain terms, what this book is -- it'll kick off with a little fiction to whet your whistle, then dig into the nuts and bolts of what a Powered by the Apocalypse game looks like, what this particular PbtA game is like tonally, and the scale and scope of the stories that it's intended to tell. It'll also break down a few basic assumptions to keep in mind as you read -- for instance, that the Corporations serve their own interests, not yours, and that the Law is way more likely to side with the Corps than with you.

CHAPTER ONE: Setting is where a lot of new writing is happening -- now, as written, MSW assumes that you're going to make your own Settlement and tell its story. But sometimes that well of inspiration runs dry. Maybe you want to run a one shot. Maybe you just need a little structure in your Sphere. So we're going to give you three example Settlements, complete with story hooks, a breakdown of the big three Corps inherent in the setting, a rundown of how the Heeled, Law, and Void might operate, and some NPCs for each to fill out the corners of your little space-town. We'll also give a view on the Civ from inside your Sphere, and a few options for what that might actually be and mean in your game.

CHAPTER TWO: Basics covers, well, some of the basics of how to play -- not from a mechanical standpoint, that's a later chapter, but just to get you accustomed to the flow of MSW. We'll talk about how scenes frame sessions, how sessions build into stories, and how stories lead into downtime, then back around again. We'll talk about why the game loop is what it is, how to work with it rather than against, and why you should even want to. But first, we'll talk a bit about safety -- because it's important. We'll swing back to more specifics about safety tools later at the top of chapter six, because it's worth mentioning twice.

CHAPTER THREE: Player Characters gives us an overview look into our core playbooks -- all ten of them! We'll talk, broad-strokes, about the narrative each playbook is intended to set up, how that narrative fits into a Settlement, and why you might want to play that narrative. This chapter also acts as a run through character creation, a look at how characters mesh with each other, and how they advance and, ultimately, how they might end.

And speaking of endings, I think I've rambled enough for one day -- we'll see you for part two of this table of contents breakdown later, pard. Happy trails, and remember -- make sure to put out the fire before you wander off.

Weird western roleplaying, Powered by the Apocalypse -- in Space!